The particle NE is a complicated beast. In the next 4 episodes of Ask Manu Italiano we'll try and demystify it and make some sense of it!

Watch the PART 2 of the Lesson 1 HERE

You need to get good at this one!

Generally speaking NE works just like any other pronoun, that is, it replaces something that was mentioned before.

As a guideless, in most cases, the implied meaning of NE (which you might or might not translate into English) is:

And NE usually replaces a QUANTITY.

QUANTE MELE MANGI?
How many apples are you eating?

NE MANGIO TRE.
I eat three (of them, of the thing we are talking about)

QUANTI CAFFÈ BEVI?
How many coffees do you drink?

NE BEVO UNO.
I drink one (of them, of the coffees) 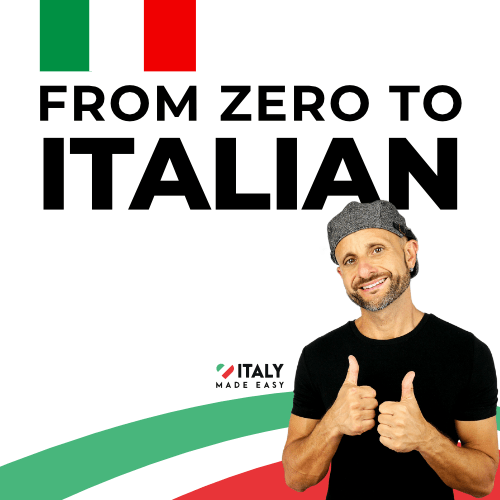 HOW ABOUT THE DIRECT OBJECT PRONOUNS?

You know you are dealing with the “object” if you can ask the question:

Right after the verb of a sentence and the next word (the one you are wanting to replace) is the direct answer.

We could ask “WHAT?” right after MANGI and LE MELE would the grammatically correct answer.
That's a direct object, which we would replace with the appropriate Direct Object Pronoun. Not NE.

In this case the pronoun would be LE, which means “them” for feminine plural.

CONOSCI MARIA?
Do you know Maria?

NE does not replace the direct object…

PRENDE UN CAFFÈ?
Would you like a coffee, sir/madam?

SÌ, NE VORREI DUE.
Yes, I would like two.

Here the question we need to ask for this to work grammatically is NOT “WHO/WHAT?” but rather:

SÌ, NE VORREI DUE.
Yes, I would like two.
TWO of what? Ah, of the coffees!

It's not compulsory to use the NE… but you'll want to!
We are not forced to replace a known noun with a pronoun, right? I could say:

QUANTE MELE MANGI?
How many apples are you eating?

We could answer with:
MANGIO TRE MELE
I eat three apples

But why would we, when we can avoid having to repeat the word MELE!

These cases are the more complex ones…

As a learner of Italian I really believe that you should have a solid grasp of NE when it replaces a quantity, which is the most common case and the one that you can master fairly quickly.

The following cases are a little more advanced and complex. I suggest you get an understanding of why Italians are using NE here so that you don't get lost when you hear it.

CONOSCO RITA E NE AMMIRO LA GENEROSITÀ
This is the same as saying:

Italians will use the NE, just like in English we could use WHOSE:
I know Rita whose generosity I admire
That's because NE means “DI LEI” or “OF HER'S” “BELONGING TO HER” “HERS“

Or even more obscure…

THE THING THAT WE ARE TALKING ABOUT

IERI HO AVUTO UN PROBLEMA A LAVORO E NE HO SUBITO PARLATO CON VALERIO
Yesterday I had a problem at work and I immediately talked about it with Valerio.

Are you seeing a pattern here?

SONO ANDATO IN UFFICIO ALLE 9 E NE SONO USCITO SOLO ORA!
I went to the office at 9 and I only got out of it now!

NO, NON NE HO VOGLIA.
Now, I don't feel like it.
Literally “No, I do not have the want for it“

Why NE? Because we are saying:
NO, NON HO VOGLIA (DI ANDARE AL CINEMA)
No, I don't have the desire (of going to the cinema)

Seen the pattern yet?
A few more sentences before giving you the magic potion of knowledge…

VUOI UN CAFFE?
Do you want a coffee?

NE VOGLIO DUE!
I want two (of them)

QUANTI FIGLI HAI?
How many children do you have?

È DA MOLTO TEMPO CHE NON VEDO LUCIA. NON NE SO NIENTE.
It's been a long time since I've seen Lucia. I know nothing about/of her.

Turn the page for the magic potion.
You will use NE whenever your sentence would imply: OF SOMETHING.

In other words, if the thing you are replacing needs to be introduced by a “DI” (“OF“), chances are you will need to replace it with NE.

Go over all the examples in this PDF to see the pattern!

Watch the PART 2 of the Lesson 1 HERE 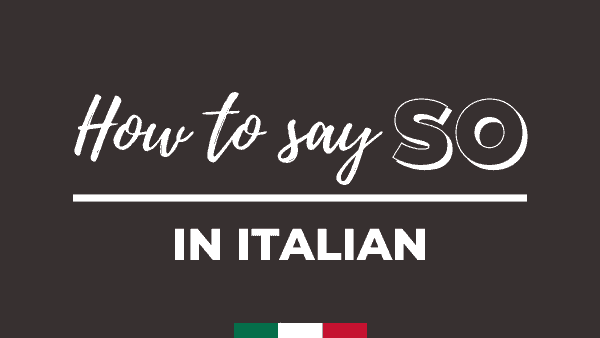 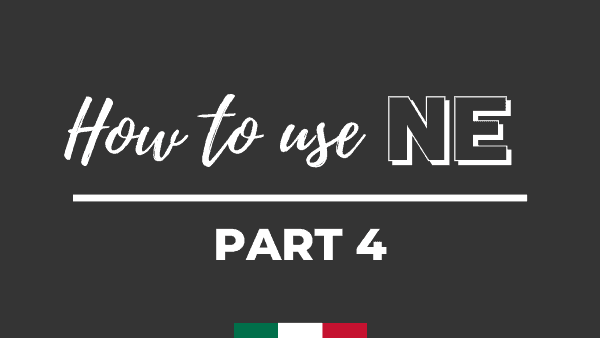 How to say “AS SOON AS POSSIBLE”
in Italian

A road trip down the Italian coast

Top 10 things you will love about Italy